Meet the Jetstones. And they even liked Robin Williams. 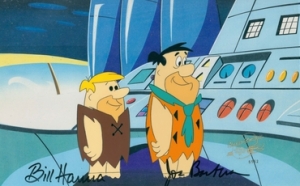 Further to yesterday’s SteynPost on the Aussie schoolboy and the severed head he’s holding [tweeted from Syria, Khaled Sharrouf’s son, a child raised in the suburbs of Sydney, holds up the decapitated head of a slain Syrian soldier], Sydney’s Daily Telegraph calls out Opposition Leader Bill Shorten on his bizarre warning that Australians think twice before “using” that image. The reason Mr Shorten feels he has to threaten his fellow citizens is because of the profound challenge that photograph poses to the multiculti delusions in which he and many others are so invested. On a related matter, Hawaii reader Gregory Hart writes:

I was watching a video of the August 8, 2014 New York Times interview of President Obama by Thomas L. Friedman when I experienced such a sense of deja vu that I thought I was experiencing a temporal lobe seizure. At approximately the 50:20 mark of the interview, President Obama was lamenting the sad state of America’s infrastructure and as an example compared it unfavorably to Singapore’s airport. Like a trained seal, Friedman trumpeted out: “Like going from the Jetsons to the Flintstones!”

Even by the standards of us columnists, Thomas L Friedman is a lazy old tosser [what follows are multiple examples of Friedman using identical analogy in different columns]…..Friedman is the senior foreign-affairs voice at America’s most influential newspaper, and he can’t let go, as the years roll by, of a childish and inadequate analogy. What if the world isn’t as simple or simple-minded as Friedman thinks? What if it’s possible to have a foot in both camps – to have a stone-age sensibility with jet-age gizmos? To be, so to speak, a Jetstone. That’s what Isis and its cellphone jihadists represent. They’ve mastered the veneer of a Jetson society – “That’s my boy!”, as the proud father of the head-holding young tyke Tweeted – but underneath is a primal, unyielding, flinty Flintstone stoniness. On the same theme, last night, in a strange intersection of the day’s top stories, Isis supporters began Tweeting about their fondness for Robin Williams movies.

Abdullah, who has the Twitter handle @mujahid4life, responded:  Good movie. Loved it as a kid.

When non-jihadists expressed bewilderment at this enthusiasm for Jumanji, Omar Shishani replied: We are humans like u… Why we shouldn’t see movie?!

Mr Shishani is right. It’s perfectly possible to find Robin Williams funny and still want to saw your head off. It’s always been like that: Saddam Hussein liked Frank Sinatra LPs and English “Quality Street” toffees. Hitler’s favorite operetta – The Merry Widow – was the Cats of its day in London and New York, complete with merchandising boom. Patsies like Bill Shorten think “assimilation” is about wearing baseball caps and listening to the same crappy pop songs as everybody else. It’s not. It’s not enough, and it never has been. A Robin Williams fan interrupting his decapitation of an Iraqi Christian to reminisce about Jumanji is both a tribute to pop-cultural imperialism and a reminder of its limitations……