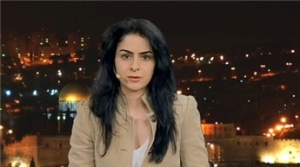 The truth had to come out, eventually.

In 2012, CBS aired a notoriously dishonest “60 Minutes” segment about Christians in the Holy Land. In the segment, prominent Palestinian Christians tried to dismiss legitimate concern about the suffering of Christians in Muslim-majority Palestinian society as a “great selling point.”

Now, one of the sources who appeared in the segment, Christy Anastas, has stepped into the spotlight to reveal the truth about the suffering endured by Christians living under the Palestinian Authority, a truth that is completely at odds with the “60 Minutes” story.

Anastas, who appeared in the 60 Minutes segment along with her mother came forward earlier this month in a talk she gave at Uppsala University in Sweden and which is now posted on Youtube.

During her talk, which can be seen here, Christy directly contradicts the story told by Bob Simon in the “60 Minutes” segment on Christians in Bethlehem that aired in 2012.