Inconvenient Truths about Race and Slavery; Not to deny African-American history, but to contextualize 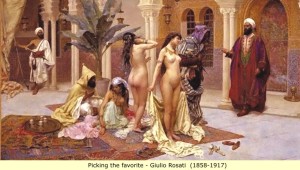 “The truth is harsh.” So spoke the philosopher Friedrich Nietzsche, back in the 19th century. On no topic is the truth harsher than on that of race.

The Eric Holders of the world incessantly bemoan the absence of an “honest discussion of race” in America. But such a discussion, beginning, as it must, with a discussion of slavery, is actually the last thing that they could afford to have, for such a discussion would include facts that would undermine much of the ideologically-invaluable conventional wisdom concerning this topic.

For instance, the very word “slave” stems from “Slav,” i.e. a reference to the experience of millions of (white) Slavish people who endured centuries of slavery at the hands ofAfrican Muslims. This, of course, is a most inconvenient truth, for it is a most Politically Incorrect truth. But it is the truth.

Yet the Slavish aren’t the only whites who spent centuries in captivity: Europeans of various backgrounds were enslaved by African Muslims as well. All of this is heavily documented in such neglected pieces of scholarship as Robert Davis’s Christian Slaves, Muslim Masters: White Slavery in the Mediterranean, the Barbary Coast, and Italy, 1500-1800 and Paul Baepler’s White Slaves, African Masters: An Anthology of American Barbary Captivity Narratives.

Nor is it just that millions of whites in Europe were made to toil in bondage for hundreds of years. Don Jordan’s White Cargo: The Forgotten History of Britain’s White Slaves in America and Michael Hoffman’s They Were White and They Were Slaves: The Untold History of the Enslavement of Whites in Early America impeccably establish that whites were enslaved in colonial America as well. Moreover, these brave authors show that the conditions that whites, including, most tragically, white children, had to endure both en route to the colonies as well as once they arrived were at least as dreadful as those experiences.

…..Of the 12.5 million Africans sold during the era of the Trans-Atlantic slave trade, Gates further observes, only about 388,000 were shipped to America.

An honest discussion of race in America would include the fact that whites were slaves, for sure, but it would also have to accommodate the obscene truth that as many as 4,000 free black families owned slaves in the antebellum South. More stunning still is that, arguably, the first slave master in early America was a black man…..

This entry was posted in Israel & Middle East, Politics and tagged Slavery. Bookmark the permalink.